Only a Matter of Time

If you've been following along over the last four years with my ongoing series inspired by vintage yearbook photos, you probably knew it was only a matter of time before those characters leapt from the sketchbook to the wall. I could feel it too. Mesmerized & enchanted, I keep returning to these greyscale faces, reading their descriptions, examining their clothes, looking into their eyes after their gaze toward the future was frozen on film. I've rendered those visages of yesteryear in many ways and I have yet to grow tired of their inspiration. As time passed, I began to wonder about elevating my efforts from playful doodles to more formalized paintings that I could show. 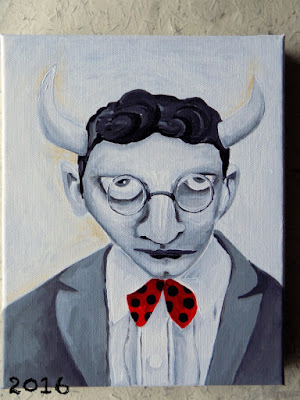 A little over a year ago, I made my first foray into bringing these portraits to canvas. At that time, I thought maybe I would also use vintage mug shots as reference. Combining portraiture with my enduring love of monsters resulted in this first attempt. While I personally love this painting (and others encouraged me to forge ahead,) ultimately I let fear still my brush. At the time, I was preparing for my 2016 show and I needed to build an inventory of work suitable for sale. I didn't think this particular idea would have much market value. That, by the way, is a terrible reason for giving up on an idea. Art doesn't have to match the couch or always be pretty and/or suitable for mass consumption. I confess, though, to occasionally forgetting this rule-of-thumb when time and courage grow short. However, all in all, it is always best to create for yourself first and the walls of others second. 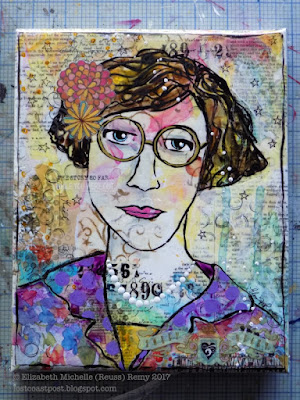 I didn't return to canvas until this past April when I experimented with Dura-Lar Wet Media Film attached to canvas. While I had previous used and loved this technique on index card-sized portraits, I wasn't as enamored with it on a larger scale. So again, I set aside the notion of canvas portraits.

Fast forward to the present: My annual show is  due to hang the first week in October. Up to this point, every canvas I've completed features some sort of animal. A couple weeks ago, it seemed obvious that the show would, in fact, center around animals. I tend to be very rigid about my shows: all the pieces are rendered with the same technique on the same type of substrate and have a unifying palette and subject matter. I've always done it this way even though I actually love shows with a diverse - even eclectic - variety of pieces.

And then, a lightning bolt of inspiration struck. I looked at these small, 5x7-inch oval canvases I had bought - once destined for small animal portraits - and knew exactly what they needed to become instead. I made one and there was no going back. 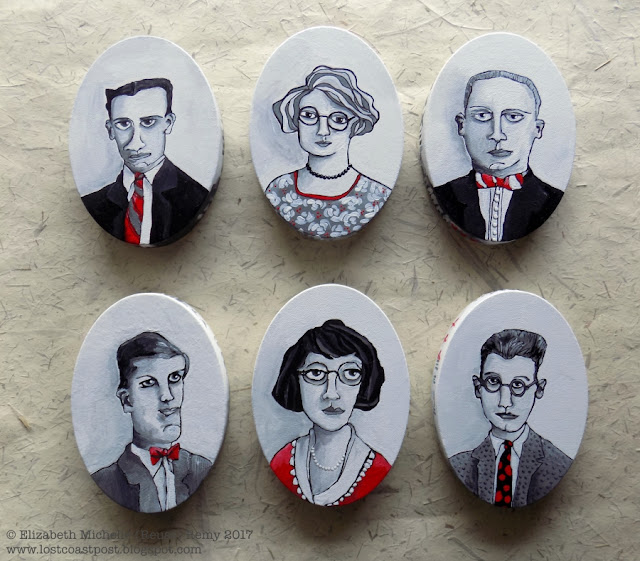 I have zero idea how they will mesh with everything else I've already painted and even less idea about how they will be received at the show. This time around, I don't care. I am making them because I love them. Others might love them as well. I hope they love them enough to purchase one or two. However, if the entire Class of '25 comes back home with me at the end of October, it will be fine as they already have a lasting place in my heart.

Pat Post said…
Those oval canvases are perfect for your portraits! Love them!

Loulou in Texas said…
They just keep getting better and better! Those oval canvases are perfect for the class pictures.

gretchen said…
these are fabulous! and yes - the oval canvases! just perfect.
3:26 PM

Mary Jo said…
I recently took an online encaustic class and the instructor talked about how important the size and shape of the substrate is to the final outcome. I had never thought about it before. This is a great example of that principle!
8:09 AM

Miss Iowa said…
The Class of '25 is fabulous! Each member has real personality and the limited color scheme means your eyes focus on the details. Love them!
7:47 PM

A Little About Me:

All content on this blog is protected under U.S. copyright laws and international conventions. No portion of the artists' visual or verbal postings may be duplicated, altered, downloaded or reproduced in any way without prior written permission. This notice also applies to images & designs found at my Flickr photo stream. Please play nice!

Have a more in-depth comment or question? Feel free to drop me a line:
lostcoastpost (AT) suddenlink (DOT) net